A tale of 2 thieves 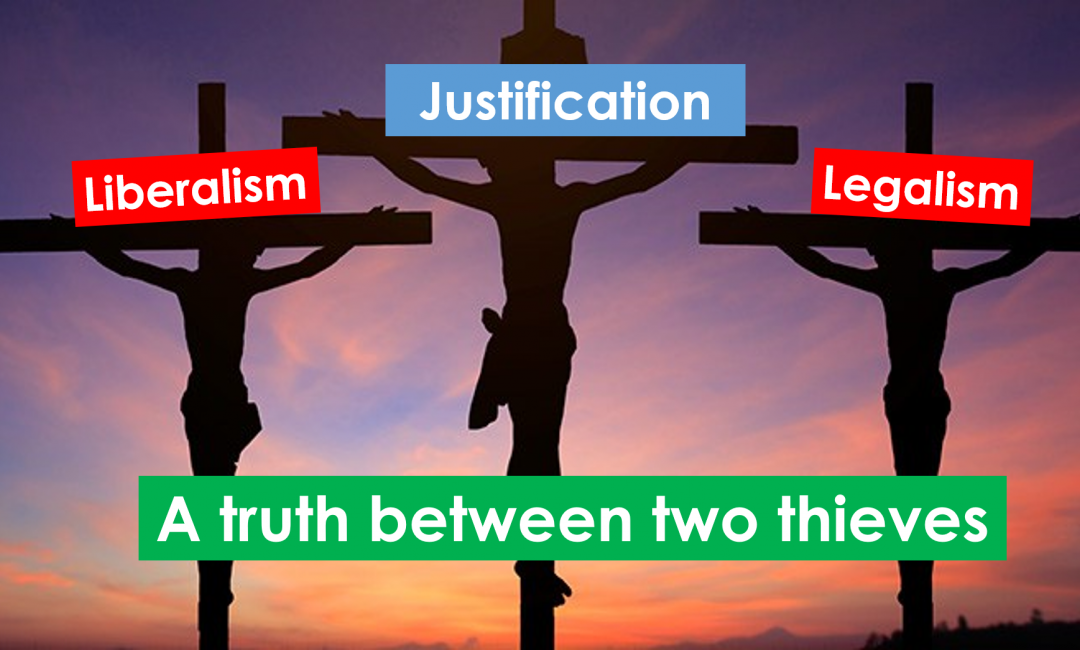 I hope you’re enjoying our Romans series as much as I am. I love Paul’s passion for the gospel and his deep desire that we, as Christians understand it and how it affects every part of our lives.  He wants us to know what it is to live out our new status – our justification by faith alone, the free gift of eternal life in Christ Jesus our Lord.

In chapter 6-7, he addresses 2 thieves (cf Tertullian 2nd century) that seek to rob us and undermine our new identity. Liberalism takes the perspective that sin no longer matters and we can live however we like. It’s the ‘have your cake and eat it’ of the gospel. God’s grace is sufficient so I’ll just please myself and keep on living as I was before. This outlook makes much of God’s love for us but belittles His holiness; it makes light of sin and its consequences.

In contrast, legalism suggests that God’s grace isn’t sufficient and builds a framework in which we work to earn our righteousness. It’s characterised by language made up of  ‘should, must, have to and got to’ and when we fail to do ‘as we should’ it results in guilt and condemnation. Paul says the fruit of allowing these two thieves to control us is death!

2 things really impacted me as we looked at these verses together. Firstly the need for a death! We frequently present death as the ‘penalty for sin’, the cost to make us right with God. This is true, but I was struck at how Paul makes clear that death is what frees us from the dominion of sin and death also releases us from the authority of the law.
6v7 For one who has died has been set free from sin
7v4 Likewise, my brothers, you have also died to the law through the body Christ

Christ’s death was not simply a punishment served or a debt paid. It is the means by which He frees us from slavery to sin and releases us from captivity to the law. We are invited to participate in Christ’s death, and the legal bind we could not break in life is broken for us by death. I’ve found an increasing joy in deepening my understanding of what Jesus’ death, and my inclusion in his death has achieved for all those who accept him as Lord.

The second thing that has changed for me is my view of ‘freedom’. We live in a culture that celebrates individualism and ‘freedom’ is portrayed as “being who you are” and “doing what you want to do”, often disregarding the consequences or the fact we live in relationships and community with others. We often sing songs celebrating how Christ has set us free and quote famous verses like Gal 5.1 – For freedom Christ has set us free. But what do mean?
I’m struck at how both Paul’s examples are clear that we are freed for a purpose. He tells us instead of being enslaved to sin, we become slaves of righteousness.
Then, that we have died to the law…so that you may belong to another, to him who has been raised from the dead, in order that we may bear fruit for God (Rom 7:4).

‘Freedom’ under sin isn’t freedom at all; But freedom in Christ is to become a slave to righteousness. We’re released from the oppressive husband that is the law and freed to belong to Christ himself. Both slavery (to righteousness) and belonging (to Christ) are words that appear to suggest the opposite to the worlds concept of ‘freedom’. Christ is our master and husband! But this is real freedom…the world’s view of freedom is right – freedom is being who we are made to be, but in God’s eyes. In these verses Paul is telling us who we are and that is what changes our view of freedom. We were created to be the bride of Christ, beautiful and unblemished by sin. We were created to work with and for God and to bear fruit for Him. We are now free to live forever in relationship with God! We are free to do what is right! We are free to be who He made us to be so let’s allow God to tell us who he made us to be, rejoice in our freedom and live it out.