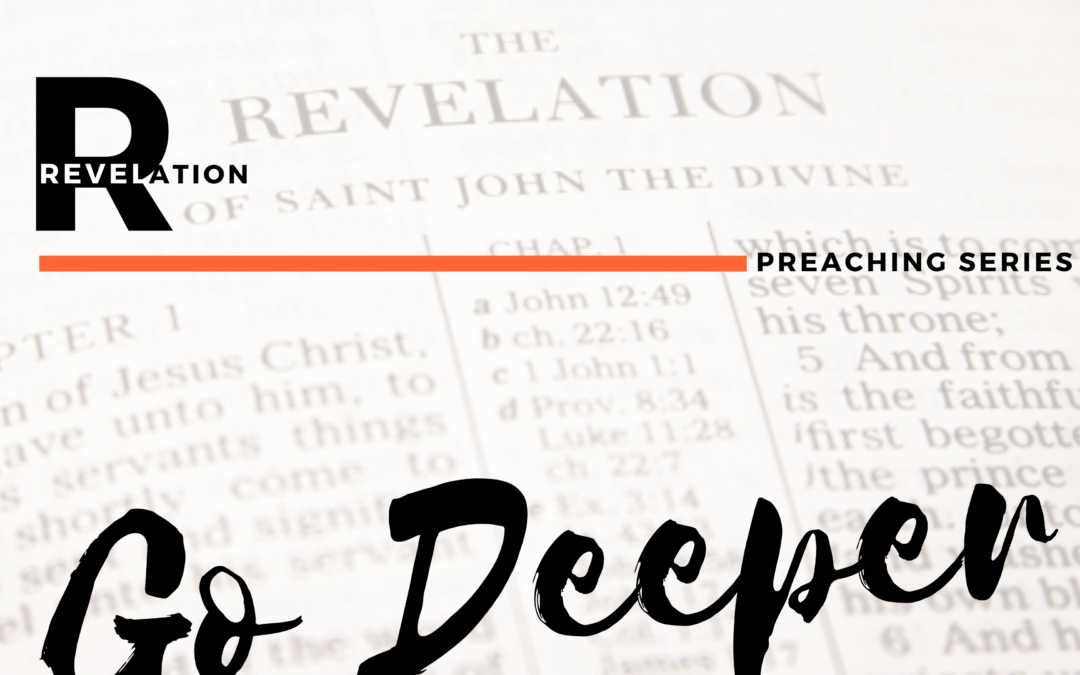 John’s article here is a very helpful aid to assist us as we continue to interpret this dynamic book of the bible.

Starting with chapter 6, Revelation plunges us into a complex series of visions. These challenge our understanding because they often seem obscure. They also challenge our emotions because some of the visions contain distressing aspects.

This is the first of two short reflections about understanding Revelation which deal with both these challenges. Using examples from chapter 6, the subject of our most recent message, they will start to explore some of the difficulties.  I hope this will help us as we continue our Sunday sermon series.

This first article looks at some questions of interpretation. Particularly I want to ask:

In both cases I’m going to use a simple question from chapter 6 to explore the more general issue.

Because Revelation is such a complex book, several approaches to interpreting it have developed.

To put it rather simply, the preterist approach sees the book primarily or entirely as concerning events around the time it was written. The idealist takes it as showing timeless truths. The historicist interprets it as events throughout history from the time of writing to the return of Jesus and the new heaven and earth. The futurist sees it depicting events leading up to and following the return of Jesus. All of these approaches have had advocates among scholars and Christian leaders.

As you will see, I combine the preterist and idealist approaches, while recognising that some parts of Revelation, near the end, deal with events close to the return of Jesus and after. This is also the approach taken in our preaching series. While I accept that there may be genuine differences with some other believers I believe that this is the most natural and straightforward way to interpret the book. Hopefully I can explain why.

In popular understanding, Revelation is seen mainly as predictions of current or future events. This fits with a historicist or futurist approach. For example, consider 6:8.

“They were given power over a fourth of the earth to kill by sword, famine and plague, and by the wild beasts of the earth”.

Is “plague” here a prediction of the coronavirus?  Some people claim it is.[1]

To get at this question we need to think about the nature of Revelation as a book, noting that it is a mixture of genres.

First it’s a revelation, (1:1), “the revelation of Jesus Christ”. It’s from Jesus and about him. It’s an unveiling, helping both the original readers and us to see what would otherwise be hidden, to see things as they really are. In that way we wouldn’t expect it to be mainly about predictions of specific future events, but rather helping us to see the hidden realities of life as it is now. In chapter 6, the Christians could see that Jesus is the Lord, in control of world events, despite all the difficulties they were facing.

Second, it’s a prophecy (1:3): “Blessed is the one who reads aloud the words of this prophecy.”

We tend to think of prophecy as prediction. But in fact most prophecy in the Bible isn’t prediction. Basically a prophecy is a direct message from God by the Spirit.

As a prophecy, we would expect Revelation mainly to be about correcting, warning, building up, encouraging and comforting God’s people, which we see very clearly in chapters 2-3 and at intervals throughout the book. In fact, the whole message is to help the Christians in their current situation: “This calls for patient endurance and faithfulness on the part of the saints” (14:10). Specific predictions seem to be mostly about events at the very end, the last judgment and the new creation (chapters 20-22), encouraging the believers to be faithful now.

Third, It’s a letter (1:4) “John to the seven churches that are in Asia.” John was writing to a particular bunch of people to encourage and challenge them in their immediate situations. They would not have known about Covid, over 1900 years later! But they had plenty of experience of plagues, which were often devastating in the ancient world. So if this is referring to any particular plagues, it would probably be ones they were familiar with. John was writing about things that affected them!

To sum this up, Revelation was a prophetic, revelatory letter written to seven particular churches, to help them see the reality of the battles they were facing and be faithful to Jesus. It isn’t a prediction of Covid!

However, this is not all. There were seven churches. Seven is the number of completion. These churches were representatives of all the churches in Asia, and indeed all the churches at the time. And the messages still apply; they are truths for all time, for all the churches. Chapter 6, showing that Jesus is the ruler of world events, is as vital now as ever.

So the four horsemen are a picture of what is always going on in the world: conquest, war, famine and death. And Covid does come into that category, as part of the pale horseman’s work. So do SARS, swine flu, Ebola, 1918 Spanish Flu, the 1665 Great Plague of London, the Black Death, and many others. They are all examples of death by plague. But this isn’t a prophecy just about any specific one of them.

In summary, Revelation was written to a group of churches in certain circumstances, to meet their immediate needs, but it deals with issues that are timeless and it’s therefore also relevant to us.

There’s an important point here. As noted before, some approaches need us to identify passages in Revelation with current or historical people or events.[2] To me, this doesn’t seem a helpful approach; Revelation was written to encourage faithfulness, not to get us immersed in matching its details with specific people or situations that were unknown to the original readers . It shows the triumph of Jesus against all opposition, strengthening us to be faithful in the face of any difficulties at any time. That’s what we need, not speculation about particular events.

So let’s not get bogged down trying to match the images in Revelation with particular events or people today.

Revelation is full of symbolism, in both the images used and the numbers. Identifying what the symbolism means is therefore important.

In 6:2 a rider on a white horse with a crown is introduced.

I looked, and there before me was a white horse. Its rider held a bow and he was given a crown, and he rode out as a conqueror bent on conquest.

Later in 19:11-16, Jesus is shown as a rider on a white horse, with a crown. Some people therefore believe Jesus must be the rider on the white horse in 6:2.

Is this Jesus? He is certainly a conqueror and he wears a crown, so there are definitely some similarities. However, I doubt it refers to Jesus.  Here are a few reasons.

Therefore, I am pretty convinced that the rider on the white horse is not Jesus. The immediate readers would probably understand conquest as the imposition of ideology or false religion. The cult of Empire worship was a great threat to the Christians then. Of course, the challenge of false ideology or religion has also been relevant to many other situations throughout history.

But suppose I’m wrong. Suppose the rider of the white horse is Jesus. Would this change the message of the chapter?

We would see Jesus going out to conquer, probably through the gospel being preached. The other horsemen bring all kinds of bad things, perhaps opposing Jesus. But that doesn’t really change the situation. The Christians are going through many hard things (the last three horsemen), and some of them are being killed, but Jesus still rules. The empire’s claims are exposed as being false. The martyrs will finally be vindicated. The last judgment will still come. The big picture is the same!

This encourages me that we can get the message even if we don’t get all the symbolism perfect.

However, Revelation is a very symbolic book so we should do our best to understand the symbolism.

Occasionally it’s explained. For instance, in chapter 1 Jesus is walking among seven candlesticks, and we’re told that these are the seven churches. We don’t need to look any further.  But mostly the symbols aren’t explained. So how do we go about understanding them?

Since the book was written to particular groups of Christians then, it’s likely that most of the symbolism refers to things they would understand.  This is always a good principle for interpreting scripture: what did it mean to the original readers? So looking at what was going on around that time is a good starting point. For example, we know that the bow was a symbol of pagan religion (point 1 above). We know that they were facing challenges from emperor worship. These help us to see that the rider on the white horse probably isn’t Jesus.

Comparing with other passages in Revelation may also help us. This is another principle for interpretation: the context within the book that we’re looking at.  In the immediate context, chapter 6, it doesn’t seem very likely that the rider on the white horse is Jesus (points 2 and 3).  More widely in Revelation, there are the seven trumpets and seven bowls to compare with the seven seals (point 4 ).

Also we can look in other books of the Bible. The four groups of horses in Zechariah also help us to see it’s probably not Jesus (point 5).

There are also general things to understand about the symbolism of the times, such as the meaning of the numbers. The origin of such symbolism is generally in the Old Testament, such as the 7 days of creation, the 10 commandments and the 12 tribes.

Seven is the number of completion, and groups of seven come many times in Revelation (churches, candlesticks, spirits, stars, seals, trumpets, bowls, angels, heads). Also, certain words are mentioned seven times or multiples of seven: servant (14), saints (14), Jesus (14), Christ (7), blessed (7), ‘someone/something like’ (21), etc. This is hardly a coincidence and the symbolic meaning of these numbers needs to be taken into account.

Four is also a number of completion: living creatures, horsemen, angels, corners of the earth, winds, ‘in the Spirit’. Other symbolic numbers include three, ten and twelve, the last two also relating to aspects of completeness.[3]  The fact that so much is symbolic should make us wary of trying to identify numbers in Revelation literally with specific situations now.

Of course, much of this needs knowledge we may not immediately have. That’s why Sam Evans encouraged us to study Revelation with other people, and particularly to make use of the work done by scholars.  I have used commentaries by Ian Paul and G K Beale (warning: the latter is a very thick book!), as well as the more poetic approach by Eugene Peterson (Reversed Thunder).

But we probably still won’t get it all. Happily, as we’ve seen, that doesn’t mean we won’t get the book’s overall message and encouragement for our lives.

So let’s do our best to try to understand the symbolism. But let’s not sight of the overall message, which is probably still clear even if we don’t get every part of the symbolism.

[2] See note 1. Another current example is identifying Bill Gates and covid-19 vaccination with the beast in Revelation 13.  https://blockchain.news/news/bill-gates-foundations-covid-19-vaccine-is-satanic-plot-says-oscar-winner (accessed 15 June, 2020)