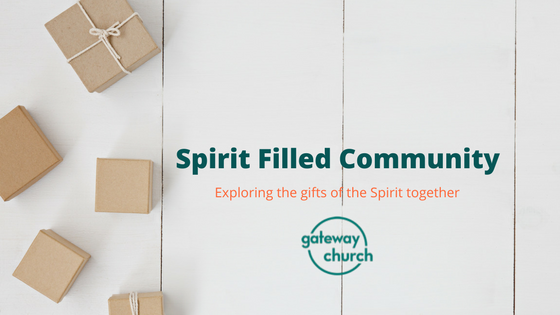 Chris Frost, one of our elders, joins us on the blog this week to introduce our new preaching series ‘Spirit Filled Community’.

We’re just about to start an 8 week preaching series called ‘Spirit Filled Community’ where we’ll take a long unrushed look at what the Bible says about being filled with the Holy Spirit and experiencing His gifts. Sadly, through bad experiences or uninformed teaching, there can be some nervousness around this subject; however, our prayer is that this series deepens our understanding and experience of the goodness of God.

To whet your appetite, I thought I’d share one of my earliest experiences of seeing the gift of the word of knowledge in operation.

The situation was getting desperate: my folks were faced with an urgent need to find their young son, my big brother, a new school, but no matter how hard they tried every door was closing. At the end of our rope again, dad gathered us as a family around the dining room table to ask for God’s help. The answer to the simple short prayers would be far more miraculous than we could ever have hoped for.

“Aberdour! Aberdour! Aberdour!” My dad found himself shouting as he awoke bolt upright in the middle of the night just a few days later. Perplexed by a word he had never heard before, he wrote it on a bit of paper by the side of his bed, went back to sleep and forgot all about it.

Some days later, finding this obscure note he remembered the incident and, out of intrigue, contacted directory enquiries (this was before Google had all the answers). “Do you have a listing for Ab – er – do – ur at all?” The bemused response: “Just the one, sir. There is a junior private school in Burgh Heath with that name.”

Encouraged by the bizarre coincidence – Burgh Heath was not far from us –, my father arranged a visit.

“I love it!” Dad beamed excitedly in the headmaster’s office. The school would so clearly be a perfect haven for his little boy. “But,” more cautiously now, “may I enquire about fees?”

The headmaster reached for a pen and discretely scribbled down an annual figure on a pad. My dad’s frame jerked as his eyes fell on the sum that screamed “Not you buddy!” So he made pleasantries and set off to his car.

But God was in this. Just as dad was about to drive off, putting the incident off as a bizarre coincidence and a waste of everyone’s time, the headmaster came running out of his office and blocked the drive. Still panting, he inquired: “What was it you said you did again?”

“Come with me,” the headmaster said as he motioned with his finger.

What followed was an explanation that the headmaster had suddenly been reminded of an unused bursary for minister’s sons that the founder of the school had set up. Both my brother and I went on to enjoy completely free schooling there until we were 13!

Stories like these open up our hearts again to see through the darkness of our often dulled experience and into the window of hopeful expectation where the King sits ready to empower those willing to embrace the adventure of being naturally supernatural.

Join us from 29 April as we explore the what it looks like to experience the gifts of the Spirit as a community in our Sunday gatherings.